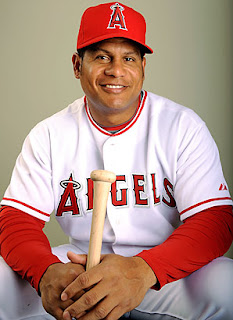 I've written other articles on this blog about people who I think might have hall-of-fame potential, but who are often left out of the conversation. Bobby Abreu is one of those players who has put together solid-season after solid-season and who, in a few years, could have a statistical resume that merits Hall-of-Fame consideration. Let's take a look:

Those numbers leave him a little short, but he is 35 years old right now and just finished one of the better seasons of his career. He is rarely injured (since 1998, he has played 150 or more games in every season) and is about as steady of a performer as there is. Let's say, for the sake of argument, that Abreu plays another 3 seasons, which sounds reasonable. That would put him at 38 and give him 17 total MLB season, a very solid career. Using his career averages, that would leave him with the following stat line in 3 years.

That's a very solid and borderline HOF competitive resume for a MLB player. With 3,000 hits and a .300 career average, Abreu would be a lock. With the way that he takes care of himself, it's not at all unreasonable to think he could play until he's 40 in which case he would challenge 3,000 hits. Baseball reference compares his stat line to the likes of George Brett, who is a HOFer. Time will tell, but if Abreu continues his high degree of consistency and stays healthy, he could very well play himself into the Hall of Fame.

I was a HUGE fan of McGwire growing up. I collected the guy's baseball cards, I followed his box score everyday, I remember watching the Cardinals games when he was close to breaking Maris' home-run record, to me he was what made the game fun to watch again (after the strike). When him and Sosa and Palmeiro were testifying and the question came to him, I was hoping that he would say, "yes I did it" or "I didn't do it" but he said neither...he didn't say anything.

After that, McGwire pretty much fell off the map. He all but vanished as far as public appearances went. And now, out of nowhere, he resurfaces after a few years completely out of the spotlight. And now, he may finally have to face (and answer) the question that us fans have wanted to know all along. Now, I think it's fairly obvious what the answer is, but that's not the point, the point is getting to hear it from him.

To me, McGwire is an anomaly when it comes to the steroids issue. The dude had legit power from the very beginning of his career, as a rookie, he hit 49 HRs which was an MLB record for HRs by a rookie. Over his first 6 seasons, he hit 217 HRs and made the all-star team every one of those 6 seasons. He was a young, scrawny phenom and looked poised to have a long, productive career. Then in 1993 he was hurt most of the season and only played in 74 games between the '93 and '94 seasons. When the strike hit in 1995, he had 39 HRs through 104 games and looked to be fully back. Physically he was becoming bigger as well. The 1996 season started a HR binge that lasted for the next 4 years, the likes of which baseball has never seen and probably never will see again. His totals for those 4 years were as follows:

By the time he was hitting that 70th HR in 1998, his physical stature would have dwarfed that scrawny power-hitter who burst on the scene 11 years earlier. But like I said earlier, that was the anamoly of the steriod-era. McGwire, throughout his entire career, was a power hitter. Though he might not have topped 60 HRs without the 'roids, he certainly didn't need them to hit it out of the park. I'm guessing that he started taking the steriods when he was injured during the 1993 season in order to speed the healing process. I just want him to give it to us straight. Baseball fans, for the most part, are a forgiving bunch and who of us wasn't glued to that television when he was swatting 500+ ft. homeruns in '97 and '98? He owes us all the truth. I'll leave you with a side-by-side of McGwire's first year in the league and his record-breaking year in 1998. 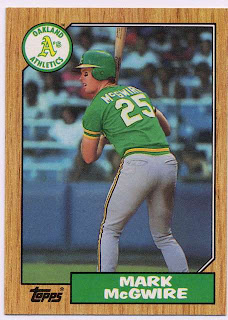 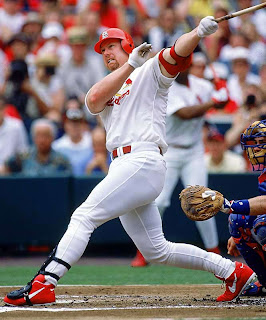 Posted by Adam Krueger at 5:30 PM No comments: Links to this post 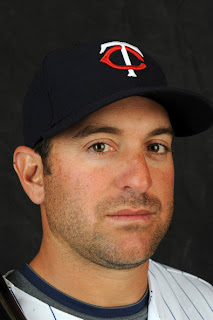 Nick Punto's base-running error in a critical situation tonight killed a brewing Twins rally and basically put the game away tonight in Game 3 of the ALDS. Punto's base-running gaffe was yet another failure by the Twins team to take advantage of myriad opportunities with men in scoring position and was symptomatic of the 'hero complex' that ultimately handicapped the Twins in their ALDS series with the Yankees. It seemed like any time a Twin would get on base or a rally would get going, it would be followed by a strikeout or a pop-out, with everyone looking to be a hero instead of doing their job and getting the runs in. Twins pitchers also seemed to let their guard down when the team would get a lead, and oh yeah, the Twins had a lead in every game of the series.
Punto's error was a heart-breaker for Twins fans and I'm not gonna lie, it's irritating that every time the Twins face the Yankees in the playoffs, they inevitably end up losing. Game 163 was great, and it's enough to lessen the pain of a playoff sweep, but the Twins failures to hold leads and play their brand of baseball in this series is tough to swallow.
Good luck next year in the new digs, it was a hell of a season considering all the injuries and adversity that this team overcame.
Posted by Adam Krueger at 10:02 PM No comments: Links to this post