How not to throw a baseball

I was doing a little reading on Dellin Betances this morning, and was reminded that he had TJ surgery at the end of 2009. This was disappointing to me because Betances was one of my favorite Yankees' prospects. He's a 6'8", lanky, hard-throwing right-hander from the South Bronx, and he has oodles of upside. Unfortunately, he's been unable to stay healthy.

This led me to remember another Yankees' prospect, Brett Marshall, who was the Yankees 6th round pick in 2008 who had an inconsistent debut in Single A ball as a 19-year old. Despite that, Marshall remains a very high upside prospect for the Yankees.

I don't want to bite Baseball Intellect's material, so I'll simply point you in their direction for a great read on Marshall's mechanics in high school. It's certainly possible that the Yankees' minor league staff made some changes to his mechanics, but given their seemingly poor record with prospects and TJ surgery, I tend to doubt it. Here's BI's gif of Marshall throwing:

There's a lot not to like. Everything's out of joint, timing wise. He elevates his pitching elbow far above his shoulder. His pitching forearm isn't vertical at footstrike. He hyperextends his knee at footplant, thereby increasing the load on his knee. It's obvious that Marshall was an injury risk; the question is whether he would make the necessary alterations to maintain his health. The other big question is whether he's even able to throw with decent velocity and control without employing the risky mechanics that he does.

We'll have to wait to find out. Marshall had Tommy John surgery at the end of 2009.
Posted by (sic) at 9:16 AM No comments: Links to this post 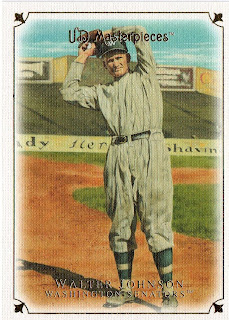 Side-note before I begin: I've collected baseball cards since I was a kid, I took probably a 10-year hiatus from 1996 to 2006, but I've recently regained some interest in the hobby, more for hobby's sake than anything else. I must say, I'm very impressed with some of the products out there right now, and Upper Deck Masterpieces is one of the best. All of the cards look like they are mini canvas paintings and the paintings they depict are phenomenal. Look for more pictures of these cards in future posts from me.

Walter Johnson is pretty much the forgotten Cy Young. It's really hard to say why history doesn't remember Johnson in the same way as it remembers other pitchers like Cy Young and Christy Mathewson, but for whatever reason, his name is not brought up as often as it should be.

"The Big Train" was the dominant pitcher in baseball throughout the first quarter of the 20th century. There were certainly notable others, even some great ones, but Johnson was about as consistently dominating as they come. From 1908 to 1926, he failed to post 13+ wins only 1 time and that one time was due to injury. During that same period, he posted 20+ win seasons 12 times.

Walter Johnson had, perhaps, the two greatest back-to-back seasons of all-time in baseball. During the 1912 and 1913 seasons, Johnson won 69 games (in two seasons!) with 63 complete games and 18 shutouts. In 1912, Johnson finished 3rd in the MVP voting after a 33-12 season and a 1.39 ERA. In 1913, Johnson bested his previous season in almost every way, posting a ridiculous 36-7 record and 1.14 ERA. In 1913, Johnson won the MVP award and that season still stands as one of the greatest by a pitcher in baseball history.

In some ways, I think Walter Johnson was probably at least as good as, if not better than, Cy Young because Johnson pitched in the modern era where the competition was tougher. Young pitched in the late 1800's and early 1900's when the competition was probably somewhat weaker. Johnson won 417 games and finished and over 21 seasons of Major League Baseball, AVERAGED 19 wins. I'll say that again, he averaged 19 wins per season for 21 years. Today, if a pitcher wins 19-20 games, they're almost a lock to win the Cy Young award.

If you get a minute, take a look at his stats, they are pretty amazing in comparison with today's pitchers.
Posted by Adam Krueger at 2:40 PM 1 comment: Links to this post