So, Johan Santana out for the year with minor elbow surgery. I'm no expert on pitching mechanics, but I did write this about him back in June:

Johan Santana - MEH. Elevates the elbow above the pitching shoulder, but doesn't seem to suffer injury. One of the more perplexing ones out there.


I have said elsewhere that I do not like to see the pitching elbow elevated above the shoulder. Santana appears to do that. I say appears because this is obviously very inexact. Here are a few samples:

Now, like I said, I'm not an expert. I'm also certain you could find plenty of images in which Santana is not elevating his elbow over his pitching shoulder. Using images is the most imprecise way of evaluating mechanics (save watching it live, perhaps). Yet, I can't help but wonder if arm injuries follow trends, and if poor pitching mechanics led to Santana's injury. I won't say that there's causality, but it is enough to make me wonder.
Posted by (sic) at 2:58 PM No comments: Links to this post

Email ThisBlogThis!Share to TwitterShare to FacebookShare to Pinterest
Labels: I Was Right?, Johan Santana, Mechanics

Well, I've been calling for a Feliz call-up, and we've been following him all year. Last night he made his appearance for Texas, pitching 2 scoreless, hitless innings and striking out the first four batters he faced, which was a Texas Rangers franchise record.

Now you're hearing some noise about Feliz and how kickass he is. Remember where you heard of him first, right here on The Bat Shatters in my cute little writeup.

Meet Neftali Feliz. You don't know him yet, but you will.

Damn right. Interestingly, my conclusion to the Feliz writeup was this:

The scouting report on Feliz is that he throws a low 80s, 10-4 slurve, and a rudimentary changeup to compliment his plus-plus fastball. 2009 will be a good time for him to develop that crucial third pitch.

Well, we don't know if he has learned his change yet, but let's talk about what he did last night. We finally have some good Pitch Fx data on his outing. Feliz threw 30 pitches - 23 fastballs, 1 slider, 1 curveball, and 4 two-seamers.

Feliz averaged 98.6 mph on his fastball and topped out at 100.5. His two seamer averaged 90.6 and topped out at 91.1 but had some crazy horizontal movement away from the LHB. His curve/slider came in at around 81. As the graph below shows, he pumped out his best heater of the night on his last pitch. Damn. 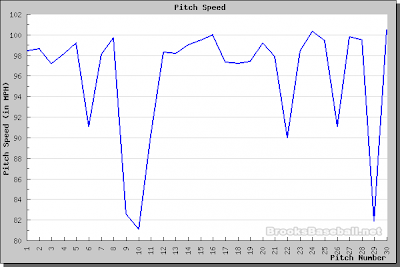 I think we're looking at a 2007-Joba for the Rangers. He's flashing serious stuff, just like he did in the 2009 Futures Game.

Welcome to The Show, Neftali.
Posted by (sic) at 2:07 PM No comments: Links to this post

We stopped doing the daily prospect roundups, for various reasons, but its time to check back in with our favorite prospects and see how they are doing midway through the year. It's quite the mixed bag, let me tell you.

Brackman is 1-11 on the year, have thrown 85.2 innings over 19 starts. He has walked 64 batters and struck out 79. His ERA is, gulp, 6.72. The only good news is that Brackman is allegedly healthy and is notching innings. He is also striking out nearly a batter per inning. He is, of course, getting horrible results and walking way too many batters per innings. Via River Ave Blues a week or so ago, I saw these two tweets about Brackman's velo. It could be fatigue, or it could be something worse. The Yankees have moved him to the bullpen for the remainder of the year in order to limit his innings and prep him for 2010, which may be do-or-die time for the giant pitcher.

Sweet, sweet Jesus Montero. After starting the year in High A, Montero earned himself a call-up to Double A. He deserved it after posting a monstrous .356/.406/.583/.989 line, with 8 homers in 48 games. In Double A Montero continued his torrid pace, and has put together a line of .307/.371/.511/.882, as a 19 year old. He has 7 home runs in 36 games. In short, the dude is raking. Baseball America took note, placing him on their Untouchable List. Montero also shot up BA's Prospect Ranking list, coming in as the third best prospect in all of baseball in their Midseason Top 25, behind Jason Heyward of the Braves and Mike Stanton of the Marlins. Not too shabby. Unfortunately, Montero recently broke his finger and is out for the year. Look for him to play some Fall Ball and get some time in AAA in 2010, with a outside chance at cracking the Yankees in mid-to-late 2010.

Neftali Feliz is having himself a great year in AAA (as a 21 year old!) posting a 3.44 ERA over 73.1 IP, striking out 70 and walking only 28. I don't think it would be unreasonable to expect him to compete for a spot in the rotation next spring. The kid has a gun. The Rangers recently called him up when Kinsler went to the DL with a hammy strain, and he did not disappoint. More on this later.
Posted by (sic) at 2:04 PM No comments: Links to this post

Why the Peavy Trade is a Bad Trade 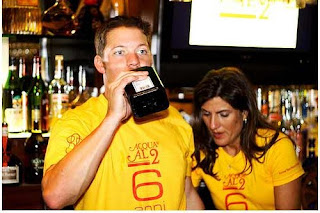 Living in Chicago, I've listened to the sports talk radio guys here fawn over Jake Peavy much the same way they have fawned over Jay Cutler since he was traded to the Bears. No doubt, the Peavy to the White Sox was one of the surprises of this year's action leading up to the trade deadline, but when you look at this deal through the critical lens of reality, the conclusion I am left with is that this was a bad deal for the Sox to make. Numbers don't lie so let's take a look at them.
Peavy has pitched for the San Diego Padres for his entire career up until now and, thus, has benefited greatly from pitching in PETCO Park, which everybody knows is one the most pitcher friendly parks in all of baseball. To me, the home/road splits for Jake Peavy foretell what is to come.
Career Home ERA: 2.83
Career Home WHIP: 1.092
Career Home BAA: .219
Career Home BAbip: .288
Career Road ERA: 3.84
Career Road WHIP: 1.299
Career Road BAA: .246
Career Road BAbip: .289
Another reason I don't think that Peavy will look the same with the White Sox is the fact that he will be playing against American League opponents instead of National League ones. What are his stats against the American League?
Career Interleague ERA: 3.29
Career Interleague WHIP: 1.172
Career Interleague BAA: .235
Career Interleague BAbip: .281
The above numbers show what the White Sox can expect when Peavy finally starts pitching for them, which will probably not be until 2010. Peavy's ERA is a full point higher when not pitching at PETCO, and not only that his numbers against American League opponents are substantially higher overall. No doubt he will continue to be a valuable pitcher, but the Sox are not getting the lights-out, ace-type of pitcher than merits trading away 4 pitchers, 2 of whom have major league experience.
Clayton Richard was, at the time of the trade, in the starting rotation with the Sox and had performed decently with a 4.65 ERA in 14 starts. Aaron Poreda was considered to be the Sox #1 prospect and had compiled a 2.65 ERA with 244Ks in 281 innings in the minor leagues. Dexter Carter was another highly-touted propect in the Sox system who had compiled a 2.80 ERA with 232Ks in 186.2 innings at Rookie and Low-A ball. Adam Russell, the 4th player traded to the Padres in the deal, was the "worst" out of the bunch but still had a decent minor league track record, loggin a 3.82ERA with 400Ks in 556.1 innings during 6 minor league seasons.
If I'm the Padres, this is a major win. First of all, you got rid of a guy who was going to make $56 million dollars between now and the end of the 2012 season. Second, you got Clayton Richard, who can step into the rotation immediately (and probably benefit greatly from pitching in such spacious confines). Thirdly, you got 2 of the White Sox top 10 pitching prospects, one of whom is probably going to be pitching for you as soon as next season.
Like I said, when you look at this trade through the lens of reality, you see how much of a gamble this is for the Sox, not only in what they gave up to get Peavy, but also in how much they are expecting of a guy who is a) coming from the one of the best pitchers ballparks in the National League and b) has a history of injuries. U.S. Cellular Field is one of the top 5 most hitter friendly parks in baseball AND it's the American League. My prediction, Peavy falls on his face, can't wait to watch it happen.
All stats provided by Baseball Reference.
Posted by LK at 10:10 AM No comments: Links to this post